Jair Bolsonaro accused his main election challenger Luiz Inácio Lula da Silva of overseeing “the most corrupt government in Brazil’s history”, as the frontrunners for the country’s top office faced off in public for a first presidential debate.

Ahead of what is shaping up to be a polarised contest in Latin America’s most populous country, tempers flared in a nearly three-hour televised event on Sunday evening that included six candidates.

Lula, a leftwing ex-president who is leading most opinion polls in the run-up to the October 2 ballot, countered by accusing far-right incumbent Bolsonaro of “destroying the country”.

Yet Bolsonaro landed a strong blow against his rival, focusing on the theme of corruption, alluding to a political bribery scheme at state-controlled oil company Petrobras under the rule of Lula’s Workers’ party, or PT.

“Why do you want to return to power? To continue doing the same thing at Petrobras?” said Bolsonaro, 67, who is running under the banner of the Liberty party, or PL.

“Your government was marked by kleptocracy. In other words, a government based on theft. And this robbery was to gain support within parliament.”

Lula insisted his administrations had taken measures to improve transparency and combat corruption. He also listed achievements in the areas of job creation and social inclusion during his two presidencies, between 2003 and 2010, before going on the counter-offensive.

“It is a country that the current president is destroying. He’s destroying it because he loves bravado,” said Lula, 76.

“The country I left [behind] is a country that people miss. It’s the country of employment, it’s the country where the people had the right to live with dignity with their heads held high”.

Debate in the campaign has largely centred on the economy, with Lula harking back to memories of poverty reduction during his time in power.

Amid a cost of living crisis, Bolsonaro highlighted a recent temporary increase in welfare payments for the country’s poorest citizens, who will receive about R$600 ($120) a month.

However, both politicians were light on policy detail. Bolsonaro’s tactics on Sunday suggested he would seek to exploit his adversary’s weak spot. 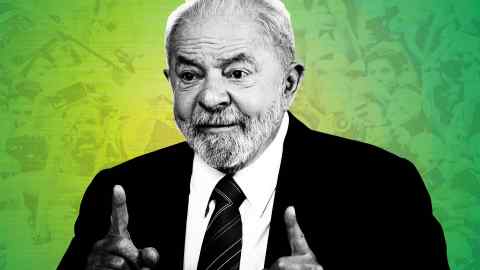 Lula, a former trade unionist, was imprisoned in 2018 on corruption charges that were later annulled, a legal reversal he sought to emphasise during the Sunday night broadcast on Band TV.

The current president found himself the target of attacks by other candidates, including for his handling of the Covid-19 pandemic and alleged delays in purchasing vaccines.

Those criticisms sharpened after he lashed out at a female journalist who posed a question — an outburst unlikely to help improve his chances with female voters, among whom he scores poorly.

“We have a president who threatens democracy. We need to change the president,” said Senator Simone Tebet, a candidate for the centrist Brazilian Democratic Movement party. “Brazil is much greater than Lula and Bolsonaro,” she added.

Bolsonaro has repeatedly questioned the integrity of Brazil’s electronic voting system, stirring concerns he may not accept defeat.

The election will go to a second round run-off between two candidates if none gains more than half of votes in the first instance.

Spousal scholar loans might quickly be eligible for forgiveness

The Advantages of Focusing On Flexibility – Credihealth Weblog

Yet one more vitality govt’s dying provides to the tally of highly effective Russian...

What are the Impact of Abortion Drugs on Single Girls?

The FBI seized extremely ‘high secret’ paperwork in the hunt for Trump’s Mar-a-Lago, together...