A graceful bridge spans the Ibar river that divides the Kosovo town of Mitrovica near the Serbian border, where ethnic Serbs and Albanians have lived for centuries. But its walkways, cycle paths and car lanes are empty; concrete slabs and international peacekeepers block most traffic.

The town has been segregated since a bloody war in 1999, which ended in a Nato bombing of Belgrade as thousands of Albanians were killed or chased from their homes by Serb paramilitaries, and even today few locals venture across the bridge between their communities. The ethnic Serbs live on the north side of the river, the Albanians on the south.

Kosovo’s Albanian majority declared independence from Serbia in 2008, a move recognised by almost 100 nations but rejected by Belgrade and local Serbs, thousands of whom still use Serbian ID cards and drive cars with Serbian licence plates.

After months of heightened border tensions, Kosovo and Serbia agreed last month to ease travel restrictions between their countries. But despite the EU-brokered deal to allow document-free travel, the antagonism between the Balkan neighbours is not over, hampering their ambitions to join the EU.

Plator Avdiu, researcher at the Kosovar Centre for Security Studies, said that while last month’s agreement soothed tensions, its scope was limited and the rhetoric from Serbia meant there was little chance of a deal on Kosovo’s status as a country.

“I don’t see space for a final agreement very quickly,” said Avdiu, adding that it also depended on international mediators. “The ID deal came quite suddenly. But if you want to be realistic . . . there is no guarantee, even if Kosovo accepts more policy concessions, for movement toward the recognition of Kosovo from Serbia.”

Serbia’s president Aleksandar Vučić, a former member of president Slobodan Milošević’s government that fought to keep Kosovo as part of Serbia, insisted the decision to allow Kosovars to enter Serbia with Kosovar IDs, without entry-exit documents, was not an indication it recognised the country’s independence. Before the deal, the extra documents had been mandatory.

“There is [no] mutual recognition . . . Don’t come to Belgrade with those stories because they are meaningless,” Vučić wrote on Facebook.

While Belgrade continues to reject Kosovo’s independence, the peace process remains in limbo. The EU’s support for Ukraine in its resistance against Russia, a traditional Serbian ally, has raised further difficulties.

In a café in Mitrovica, Miloš Damjanović, a local Serb, said he was “against any integration with Pristina. We see them as a parallel, illegal institution. We are local citizens of Serbia, whatever the Brussels agreement or other agreements say.”

“After 1999 the international community allowed Pristina to organise themselves,” he added. “We should be allowed to reorganise Serbia.”

Nato has kept thousands of peacekeepers in Kosovo under its KFOR operation, and the EU operates a rule of law mission, EULEX, to assist the local armed forces.

Locals on both sides of the ethnic divide hold little hope for a peace settlement while every family still has vivid memories of the war. But there are efforts to heal the mutual distrust.

Kosovar Albanian Valdete Idrizi was a teenager when she fled Mitrovica on one of the last buses to leave after Nato bombed Serbia in response to Belgrade’s targeted killing of Kosovar Albanians. With her 85-year-old grandmother in tow, she walked most of the way to Montenegro.

After the war she returned home and set up an NGO to foster dialogue with local Serbs. In 2019 she was elected to parliament where she served for two years as an MP. Now a cultural director in Mitrovica’s municipal government, she helped establish an art installation in the shallow waters of the Ibar that doubles as a meeting point for Serbs and Albanians alike.

“People meet in the river, which has divided us for so long. Serbs too are tired of being misused,” she said, adding that Serbian politicians had tried to encourage their Kosovo kin to divide their former province.

Some local Serbs are also working to calm ethnic tensions. Miodrag Milićević heads research group Aktiv, which advocates dialogue between Belgrade and Pristina to solve the problems of the Serbian community, which now makes up about 5 per cent of the population in Kosovo.

“I told both sides, turn down the toxic rhetoric, speak to the press jointly, bring bilateral talks to Belgrade and Pristina, not Brussels — and leave the symbolism behind,” he said.

Kosovo’s prime minister Albin Kurti, a former member of the Kosovo Liberation Army’s political office who was imprisoned by the Milošević regime, insists the talks with Serbia about normalising relations must centre on mutual recognition.

“I want to go beyond crisis management,” Kurti told the Financial Times. “We need conflict resolution . . . a transformational logic.”

But some of his countrymen still cannot countenance any compromise.

“If you ask me if we can live together, we can’t. And Serbs don’t want to, either,” said Rustem Suhodolli, a chain-smoking Albanian who was forced to flee north Mitrovica in the war and now lives in the south of the city.

He is angry at the west’s now careful neutrality, which seeks concessions from Pristina as well as Belgrade. “They once bombed the Serbs to save us and now they go soft? Bullshit,” he said.

Some Kosovo Serbs say they are caught between political rivals and their needs are forgotten.

Nenad Rašić, a former Kosovar Serb politician, said giving local Serbs more rights could weaken their reliance on backing from Belgrade — which he calls an avenue of undue influence — and unlock the path to lasting peace.

Rašić said the most significant reform would be the creation of an Association of Serb Municipalities, which would give local Serbs a stronger voice in Kosovo. In 2015 both sides agreed to establish the group but Pristina had yet to make good on it, he said. 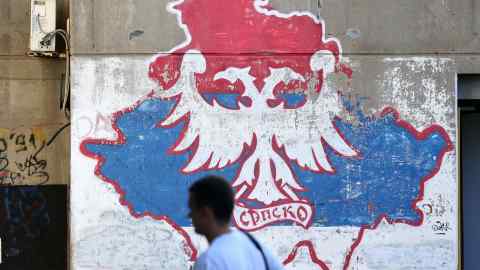 Kurti, in power since 2021, has said that level of administration would undermine the central government and could lead to “Bosnification”, or a situation similar to Bosnia where ethnically based entities must co-operate and Serbs sometimes boycott government.

Former Kosovo president Atifete Jahjaga said the only route to regional stability was for Belgrade to accept its sovereignty. “We have had enough of the short-term solutions, enough of the bandages,” she said.

10 Signs of a Urinary Tract An infection – Credihealth Weblog