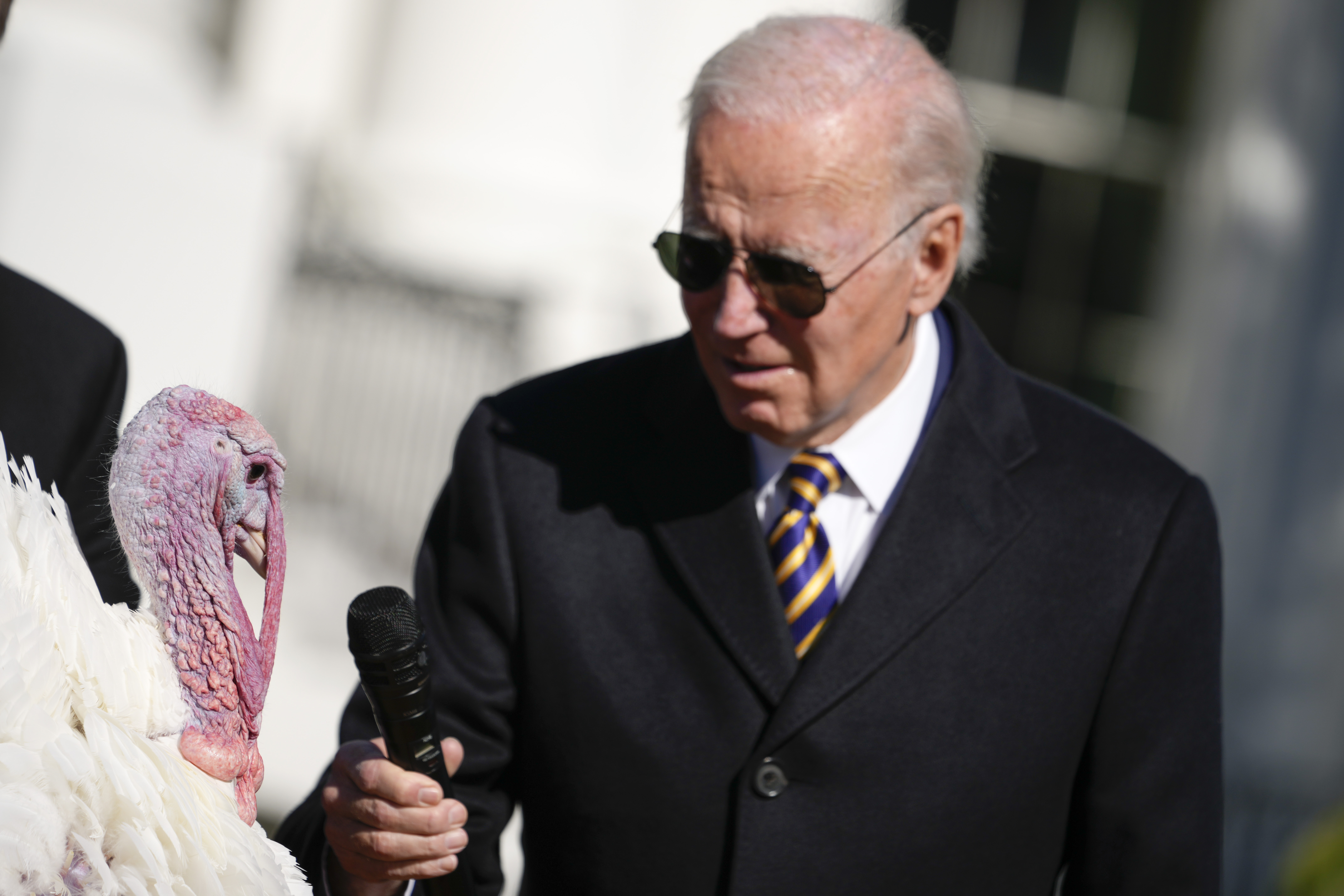 President Joe Biden continued a 75-year tradition Monday and pardoned a pair of Thanksgiving turkeys named after his favorite flavor of ice cream while cracking jokes about his political party’s better-than-expected performance in this month’s midterm elections.

“The votes are in, they’ve been counted and verified,” Biden said as he welcomed Chocolate and Chip before hundreds of people gathered on the South Lawn in unseasonably cold weather. “There’s no ballot stuffing. There’s no fowl play. The only red wave this season’s gonna be if German Shepard Commander knocks over the cranberry sauce on our table.“ Commander is his dog.

Chocolate and Chip, each weighing nearly 50 pounds (22.68 kilograms), were driven up from North Carolina on Saturday and were checked into a room at the Willard hotel near the White House to await their visit with the president and his declaration of their freedom.

The combination of chocolate and chip is Biden’s favorite flavor of ice cream. The president joked at the event that “we could have named them Chips and Science,” after the $280 billion CHIPS and Science Act that Biden championed and signed into law this year.

“I hereby pardon Chocolate and Chip,” Biden declared. Before the ceremony, Biden’s son Hunter Biden brought his toddler son, Beau, who is almost 3, outside to see the turkeys.

Both gobblers were hatched in July in Monroe, North Carolina, according to the National Turkey Federation, sponsor of the turkey tradition, which dates to 1947 and President Harry Truman.

The burst of holiday activity at the White House followed a busy weekend personally for Biden and his family, along with midterm elections that saw the president’s Democratic Party perform well enough to defy historical trends that forecast huge losses. Democrats will keep control of the Senate and, although Republicans will control the House when a new Congress is seated in January, Democrats did keep GOP gains in that chamber to a minimum.

The official White House Christmas tree also was being delivered on Monday and the Bidens planned to help serve a Thanksgiving-style dinner on a North Carolina Marine Corps base.

Biden and his wife, Jill, were scheduled to leave Washington on Tuesday to continue their family tradition of spending the Thanksgiving holiday on the Massachusetts island of Nantucket. They hosted the wedding of their granddaughter, Naomi Biden, at the White House on Saturday, followed by a family brunch on Sunday for the president’s 80th birthday.

Humor aside, the president ended Monday’s event on a serious note, encouraging people to get their COVID-19 vaccines to ensure a healthy holiday season. He also encouraged Americans to reflect and “be grateful for what we have.”

“This is a special time in the greatest nation on Earth so let’s be thankful,” Biden said.

Chocolate, and an alternate turkey, Chip, were set to live the rest of their lives on the campus of North Carolina State University.

Jill Biden was doing her part to help usher in the holidays by accepting delivery of the official White House Christmas tree. The 18 foot- (5.5 meters) -tall Concolor fir grown on a farm in Pennsylvania, the state where the first lady grew up, will fill up the Blue Room after a chandelier is temporarily removed so the tree can be anchored in place for safety.

Volunteer decorators began arriving at the White House on Monday to start sprucing it up for Christmas, according to a theme first ladies traditionally reveal after Thanksgiving.

It’s the second time that the Shealers have claimed the association’s top honor. They presented a tree to first lady Hillary Clinton in 2000.

Later Monday, the Bidens were heading to Marine Corps Air Station, Cherry Point near the North Carolina coast for friendsgiving, or to share a Thanksgiving-style meal with members of the military and their families.

The first lady leads a White House initiative named Joining Forces to support and promote the sacrifices and needs of military families. The president has pushed for and has signed several bills to help service members and veterans, including legislation expanding health care for those who were exposed to toxins from the burning of waste in Iraq or Afghanistan, or to chemicals that were used in previous conflicts.

The Bidens’ late son Beau Biden served in the Delaware Army National Guard, including a tour in Iraq, before he died of brain cancer in 2015.

The Distinction Between A Good Query And A Dangerous Query –

Cell Remedy and Most cancers – A New Frontier?  – Credihealth Weblog

Common 401(okay) balances are down greater than 20% this yr. This is what specialists...

Amazon is shopping for a agency with medical facilities throughout the nation for $3.49...

Why You Want Good skincare in Your Each day Life –...