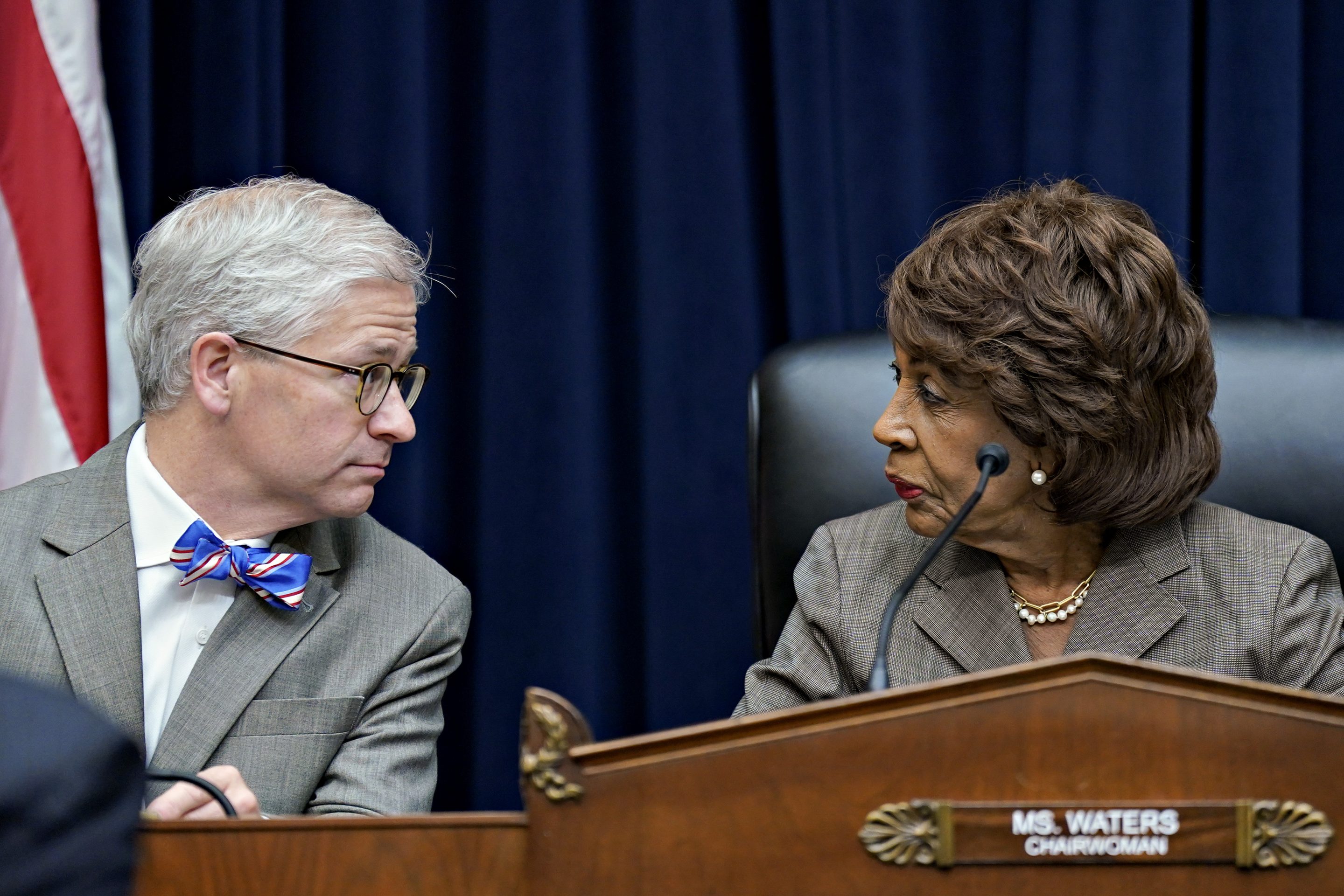 Sam Bankman-Fried was scheduled to make a long-awaited homecoming to Washington on Tuesday morning after agreeing to appear before the House Financial Services Committee. Instead, he sat in a Bahamian jail, arrested on Monday night by authorities at the behest of the U.S. District Court for the Southern District of New York.

Ray is a famously private man, with publications struggling to find up-to-date photos of him when he took over as CEO in the early morning of Nov. 11, days after FTX had stopped processing withdrawals. His previous claim to fame was overseeing the bankruptcy proceedings of Enron, although he quickly established that FTX’s failure was unprecedented—a fact referenced frequently during the hearing.

“I’ve done probably a dozen large-scale bankruptcies over my career,” said the soft-spoken Ray. “This one is unusual.”

Waters and ranking member Patrick McHenry (R-N.C.) are an odd match, with McHenry noting in his opening remarks that this was the first bipartisan hearing the committee had held in four years. Nevertheless, the two have united on the need for crypto legislation—one reason the committee insisted on holding what became the second congressional hearing on FTX.

Even without the scheduled star witness, the hearing produced sparks, splitting some of the more outspoken members into two distinct camps: crypto skeptics and advocates.

The former counted among them Reps. Brad Sherman (D-Calif.) and Juan Vargas (D-Calif.), with both questioning the technology and the clear harm it’s caused, citing the collapse of companies such as FTX and the loss of billions in customer funds.

“My fear is that we will view Sam Bankman-Fried as just one big snake in a crypto Garden of Eden,” said Sherman. “The fact is, crypto is a garden of snakes.”

On the other side were representatives including McHenry, Tom Emmer (R-Ind.), Josh Gottheimer (D-N.J.), and Ted Budd (R-N.C.), who mostly spent their five allotted minutes criticizing the Securities and Exchange Commission for its failure to prevent FTX and calling for legislation.

McHenry, who will become the chair of the committee when the Republicans take control of the House next year, opened the hearing by differentiating the FTX fiasco from crypto as a whole.

“We have to separate out the bad actions of an individual from the good created by an industry and innovation,” he said, ending with an ominous warning to SEC chair Gary Gensler.

“Next year, I look forward to hearing from Mr. Gensler early and often.”

The majority of representatives took more of a middle-ground approach, interrogating Ray about everything from the actions of the Bahamian government to FTX’s endorsement deals.

The House Financial Services Committee has over 50 members. Not every congressperson was present—and by the end of the hearing, the room was nearly empty—but the event still dragged on as many members asked Ray questions that were unlikely to elicit an answer, such as which regulatory body he thought was best equipped to oversee crypto.

The hearing also had moments of levity, including when Rep. Emanuel Cleaver (D-Mo.) asked Mr. Ray if he would support his provision to change the word “cryptocurrency” to “creepy dough.” (Ray answered that he would leave it to the committee).

Crypto points (as made up as FTT) went to Rep. Ritchie Torres (D-N.Y.) for asking about the implications of in-the-weeds tokens like Serum and were taken away from Rep. Ed Perlmutter (D-Colo.) for pronouncing Dogecoin as “dogey-coin.”

As committee members pried for more details into the spectacular collapse and Hollywood-ready descent of Bankman-Fried, the recurring theme was the utter incompetence of the previous FTX executive team.

Ray backed up his claim that FTX’s failure was unlike any bankruptcy he had seen, laying out how a company once valued at $32 billion used the accounting software QuickBooks and approved invoices over Slack.

After Bankman-Fried’s arrest at the hands of Bahamian authorities, Ray also helped shed light on the FTX founder’s seemingly cozy dealings with the country’s government, including opening withdrawals from Bahamian accounts even as they were paused everywhere else.

Ray said that during this period, which was right before he took over as CEO and initiated bankruptcy proceedings, FTX processed $100 million in withdrawals for around 1,500 Bahamian accounts—a revelation that raised eyebrows for committee members.

Rep. Alexandria Ocasio-Cortez laid out the timeline of FTX’s collapse up until Bankman-Fried’s arrest, pointing to signs that he was receiving preferential treatment from the Bahamian government.

The main takeaway that Ray stressed was that his team was still unraveling Bankman-Fried’s web of deceit, which was often difficult to separate from incompetence. When asked by Rep. Ayanna Pressley (D-Mass.) how much FTX had left to repay to customers, Ray answered that he was still finding new assets every day because of the poor management and controls.

FTX was “a company uniquely destined to fail,” Ray said.

The Trendy Board: How boards can shut the local weather change hole

NBC Sports activities head not nervous about LIV: ‘No tour in golf just like...