The UK faces a fresh wave of strike action in the new year, as nurses, ambulance staff and rail workers prepare to walk out over pay.

The PCS union, which represents striking civil servants including Border Force staff, on Friday warned industrial action would be ramped up even further if the government continued to refuse to negotiate over pay.

Britons are braced for travel disruption over the festive period, with the RMT rail union organising a strike on Christmas Eve, meaning UK roads are likely to be far busier than usual.

Rishi Sunak is contending with a series of strikes across the public and private sectors as workers respond to the cost of living crisis by demanding higher pay.

The prime minister, who has insisted public sector pay restraint is necessary to curb high inflation, said on Friday he was “sad and disappointed” at the level of disruption being caused by industrial action.

“I want to make sure we reduce inflation, part of that is being responsible when it comes to setting public sector pay,” he added. 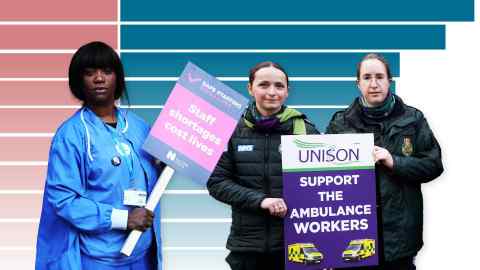 Mark Serwotka, PCS general secretary, warned of months of strikes across the civil service if the government refused to discuss this year’s pay settlement with unions.

“I think in January what you’ll see is a huge escalation of this action in the civil service and across the rest of our economy unless the government gets around the negotiating table,” he told the BBC.

The Royal College of Nursing, which organised strikes by nurses last week and on Tuesday, announced further industrial action in England on January 18 and 19.

The RCN had said ministers could avoid additional strikes by agreeing to enter talks about this year’s NHS pay settlement.

Pat Cullen, RCN general secretary, said the government “had the opportunity to end this dispute before Christmas but instead they have chosen to push nursing staff out into the cold again in January”.

The RCN is demanding a pay rise of 19 per cent. In July, the government accepted recommendations by an independent review body under which most NHS workers in England received a flat-rate pay increase of £1,400, backdated to April. This represents an increase of about 4 per cent in average basic pay.

In Scotland, where RCN members voted “overwhelmingly” to reject the Scottish government’s offer of an average 7.5 per cent pay increase, the union will announce strike dates in the new year.

Meanwhile, the GMB union, which represents ambulance workers, called off a strike scheduled for December 28 in England and Wales, saying it did not wish to worry the public over Christmas.

But it announced a walkout for January 11, coinciding with a strike planned by the Unison union, which also represents ambulance workers.

Ambulance unions are pressing for a pay rise that at least matches inflation.

Health secretary Steve Barclay accused the unions of announcing “further co-ordinated strikes in January to cause maximum disruption at a time when the NHS is already under extreme pressure”.

Latest data from NHS England showed about 35,000 operations and outpatient appointments have been cancelled since the current wave of NHS strikes began last week. Health leaders are increasingly concerned at the cumulative impact on an already severely stretched NHS.

Saffron Cordery, interim chief executive of NHS Providers, which represents health organisations across the country, said the suspension of next week’s ambulance workers’ strike would defer the disruption to the new year “which is an extremely difficult period . . . even in normal circumstances”.

The government warned travellers flying into the airports to prepare for delays at passport control, and drafted in military personnel to help cover for striking immigration officers.

But on Saturday morning Heathrow was operating as normal. A spokesperson for the airport said: “The Immigration halls are free flowing with Border Force and the military contingency providing a good level of service for arriving passengers.”

The PCS has strongly criticised the government’s 2 per cent pay offer for Border Force staff this year, and is demanding 10 per cent.

On the railways, RMT members will begin fresh strike action over pay at 6pm on Christmas Eve. An overtime ban will cause disruption throughout the rest of December, and further strikes are planned in January.

The federal government needs to guard the habitat of the Louisiana pine snake that...

Your boss may be hoping you give up as a result of it’s simpler...

What are the worst meals for my anxiousness?