The London Olympics of 2012 has failed to deliver a significant long-term increase in the number of people in England participating in grassroots sports, according to a report by MPs.

Although the games were deemed a sporting success — the British team won a record haul of 29 gold medals — and provided a boost to the economy, they failed to generate a lasting fitness legacy, the House of Commons public accounts committee said. The report found the games, which cost £8.8bn to stage, delivered £14.2bn in economic value by 2014.

National participation in sport, however, declined in the three years following the games, the study said without providing any figures, and only marginally bounced back between 2016 and 2019 with the number of adults judged as “active” rising 1.2 percentage points to just over 63 per cent.

The report was critical of Sport England, the government-linked agency responsible for growing sport and getting more of the population involved. It found that the body had disbursed some £1.5bn in grants since 2016 but had only tracked the ultimate destination of just £450mn of that money, with the balance handed out to national organisations, charities and other bodies.

Labour MP Dame Meg Hillier, who chairs the committee, said that aside from the financial benefits there had been “precious little” to show by way of legacy, even in parts of her east London constituency where the 2012 Games were held.

She described the 1.2 percentage point increase in active adults in England as “paltry” and urged the government to set out plans to address the issue. “More waste, more loss of desperately needed public money. As the cost of living crisis bites hard, [government] must set out what it will do differently to achieve change where it has not succeeded,” Hillier added.

Giving evidence to the committee, Sport England said that it had relied too heavily on a big national event and building new facilities to inspire increased grassroots participation, but was now focusing on how to motivate inactive people to exercise.

It was also working to create a legacy from last year’s Commonwealth Games in Birmingham and the success of England’s women’s national football team in winning the European Championships.

For example, a £3mn programme in the West Midlands to tackle inactivity had helped nearly 75,000 people to become active after the Commonwealth Games, which cost £778mn to stage.

The report also warned that Sport England “lacked understanding” of the financial support that the UK’s ageing leisure infrastructure needed during the cost of living crisis, with energy bills for the sector expected to rise from £500mn in 2019 to between £1bn and £1.2bn last year.

Some 70 per cent of local councils were considering scaling back their leisure services as a result, the committee heard, warning that many public sporting facilities were in poor condition, including 45 per cent of public park tennis courts that were deemed as being in poor, very poor or unplayable condition. 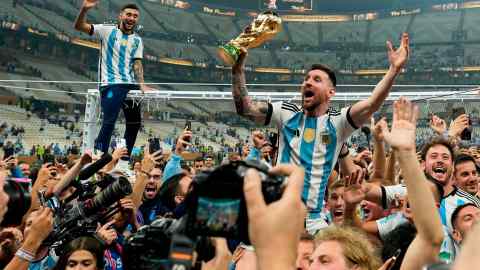 The government said that it had allocated £1bn to support leisure sectors during the Covid-19 pandemic and had recently announced £320mn for schools and more than £260mn to build or upgrade thousands of grassroots facilities.

“We will shortly be publishing a new sport strategy setting out our ambition to continue to increase activity rates and will respond to the committee’s report in due course.”

Institutional homebuyer Yieldstreet slashes shopping for ranges by 90% because it awaits a sharper...